All posts in Marianne Thomas 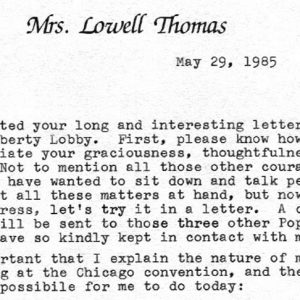 Marianne Thomas was the widow of Lowell Thomas, famous writer and broadcaster. Marianne was a great support of Willis Carto and the Liberty Lobby. She was a longtime civic activist and opponent of the Vietnam War, founding the Citizens for Moral War campaign group. She met Lowell Thomas for the first time when she asked him to accept a brochure from the Citizens for a Moral War. She later served in the Dayton International Peace Museum and U.S. Civil Responsibilities.